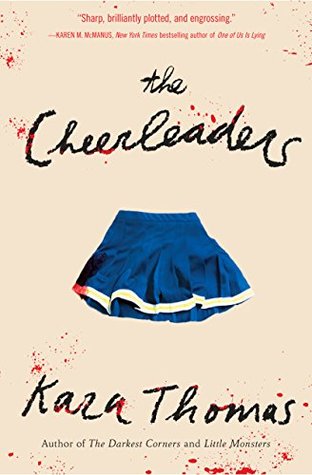 There are no more cheerleaders in the town of Sunnybrook.

First there was the car accident–two girls dead after hitting a tree on a rainy night. Not long after, the murders happened. Those two girls were killed by the man next door. The police shot him, so no one will ever know his reasons. Monica’s sister was the last cheerleader to die. After her suicide, Sunnybrook High disbanded the cheer squad. No one wanted to be reminded of the girls they’d lost.

That was five years ago. Now the faculty and students at Sunnybrook High want to remember the lost cheerleaders. But for Monica, it’s not that easy. She just wants to forget.

Only, Monica’s world is starting to unravel. There are the letters in her stepdad’s desk, an unearthed, years-old cell phone, a strange new friend at school. . . . Whatever happened five years ago isn’t over. Some people in town know more than they’re saying. And somehow, Monica is at the center of it all.

There are no more cheerleaders in Sunnybrook, but that doesn’t mean anyone else is safe.

Apart from reading contemporary and fantasy books, I am always drawn to crime and mystery stories. I can even immerse myself watching crime stories on the television for hours. So when I am given the chance to read The Cheerleaders by Kara Thomas, I am extremely thrilled to read it.

I fly through this book so easily due to its compulsive nature and easy readability. This kind of book makes you hungry for more. Even though it is a fast read, I cannot help but feel that the story is very heavy, as it discusses about real issues surrounding teenagers. Trigger warning should be placed at the beginning of the book to avoid harm.

The premise is interesting enough for me to follow, but there are no surprising revelations that make me fell out of the chair. When the plot starts to be so predictable, that’s when it becomes so formulaic. Most of the story is told from Monica’s perspective, but we do have bits of Jennifer’s point of view leading up to the cheerleader’s death. It is terrifying (but not so surprising!) to see how the mysteries started to reveal.

I truly appreciate the female relationship in this book, between Monica and Ginny who always support each other, rather than showing girls who backstab one another.

Unfortunately for me, the ending is so anticlimactic. I don’t like how the story ends because I think it can be even better. To be honest, I can easily predict the person who is responsible for the deaths. At first, you will doubt any character that you meet in the story and anything that you think you know. But after a while, you can get the gist of the story already.

All in all, I wish the book has a twistier mystery to reveal. It is an okay book and I know that there are better thriller books out there. I hear good things about Kara Thomas’ Little Monsters, so I am excited to try that one out.

Special thanks to Times Reads for providing me a finished copy of The Cheerleaders.

This is my April TBR ☘️ I am hoping to catch on some reads this month, since we are still in Movement Control Order period. I’ve received two books from Pansing which are THE PERFECT WORLD OF MIWAKO SUMIDA and THE YELLOW BIRD SINGS. Both of these books receive good reviews, so I am excited to read them. / Thank you @definitelybooks for sending me these books to enjoy ✌🏽
This is my March TBR 🍃 I have already read three books from the pile and my favourite is THE TWO LIVES OF LYDIA BIRD. I have already reviewed it so don’t forget to check it out. Link in bio. / Many thanks to @definitelybooks and @times.reads for sending me these awesome ARCS in exchange of an honest review 🤓
[REVIEW LINK IN BIO] Happy Book Birthday to this amazing book, BREAK THE FALL by @jennifercarolyn 💚 . / One of the things that made me intrigued in reading this book was the subject discussed, which was about sexual assault that happened in the sports scene. This fictional story of BREAK THE FALL was inspired by the news of sex abuse scandal surrounding the USA gymnastics team doctor, Dr. Larry Nassar. Yesterday, I have also just watched a documentary called Breaking Their Silence: Inside Their Gymnastic Scandal, based on the same topic as well. There were interviews with the parents and also the victims of the sexual assault. What I can say is that they are all so brave and courageous in fighting back to make sure the perpetrator is caught. The importance of BREAK THE FALL is to encourage more discussion about mature issues so that the public could understand how serious and detrimental it is to the victims and their families. Behind all of the popularity and fame, there’s also dark side to it. / I truly hope that this book can change on what we perceive on sexual assault. BREAK THE FALL is definitely one of the greatest YA books of 2020.
Are you frustrated by politics? Tired of your Twitter feed? Looking to make a difference in the world? Then this book is for you! / YES NO MAYBE SO by @beckyalbertalli and @aishacs is a YA story that will capture your heart and make you want to fight for change. I’m just one chapter in and I can tell that this book will blow my mind. / QOTD: What book are you currently reading? 🤓
This is my February TBR 🌿 I have received so many books this month and I am really hoping to catch up with my reading and reviewing progress. I’m currently reading BREAK THE FALL by Jennifer Iacopelli. Special thanks to @definitelybooks #pansing for always sending me wonderful books in exchange of an honest review ❤️
Currently reading A HEART SO FIERCE AND BROKEN by @brigidkemmerer and I am so happy to dive into Emberfall again 🌲 The second book has a twistier and better story compared to the first one, and that makes me hooked. / Special thanks to @definitelybooks #Pansing for sending me this gorgeous book 💚 This book is already available in all bookstores near you.
Back to top
%d bloggers like this: