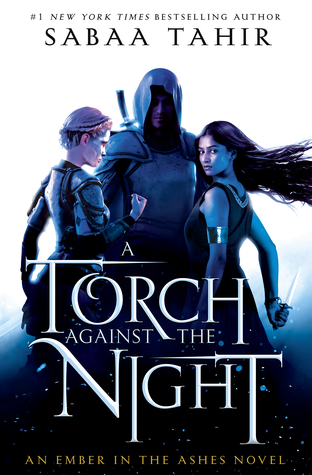 Elias and Laia are running for their lives. After the events of the Fourth Trial, Martial soldiers hunt the two fugitives as they flee the city of Serra and undertake a perilous journey through the heart of the Empire.

Laia is determined to break into Kauf—the Empire’s most secure and dangerous prison—to save her brother, who is the key to the Scholars’ survival. And Elias is determined to help Laia succeed, even if it means giving up his last chance at freedom.

But dark forces, human and otherworldly, work against Laia and Elias. The pair must fight every step of the way to outsmart their enemies: the bloodthirsty Emperor Marcus, the merciless Commandant, the sadistic Warden of Kauf, and, most heartbreaking of all, Helene—Elias’s former friend and the Empire’s newest Blood Shrike.

Bound to Marcus’s will, Helene faces a torturous mission of her own—one that might destroy her: find the traitor Elias Veturius and the Scholar slave who helped him escape…and kill them both.

It has been a while since I’ve read something so dark and intense. That’s probably the reason why I managed to read the book just in a day. Frankly speaking, at first I was scared that I won’t be able to enjoy this book as much because it has been three years since I read An Ember in the Ashes so, it is safe to say that I didn’t remember any important details from the first book. Besides, I remembered what I initially felt about the book once I finished reading it, that I was aware that some of the plot lines were similar to fantasy books I’ve read before, to a point where I went to watch reviews on BookTube to validate my opinion and apparently some BookTubers also agreed on this.

A Torch Against the Night continues exactly where the first one left off. The first few chapters are so engaging and that makes me so pumped to continue the rest of the book. We receive so many new information in this second book regarding the characters and their origins and that shows how everything either it is big or small plays into a larger story. I love character-driven stories because you get to see how they evolve and change from time to time. For instance, Laia, Elias and Helene. Sabaa Tahir writes them as human beings with instincts and feelings, rather than just plot devices to carry out the story. All of their acts in the story are supported by their own thinking process and not influenced by any other entity. I also love that the characters evolve so much in this book, if to compare with the first one. I absolutely love Helene’s character progression, where she grows as a human being by realizing and reflecting to her past doings and mistakes. I cannot wait to see where the story leads her in A Reaper at the Gates!

All in all, this book is truly a PAGE-TURNER. Once you read this, you cannot stop and when you finish it, you will crave for more. Like I do.

Thank you Times Reads for providing me this wonderful copy of A Torch Against the Night!

2 thoughts on “Review: A Torch Against the Night (Sabaa Tahir)”

This is my April TBR ☘️ I am hoping to catch on some reads this month, since we are still in Movement Control Order period. I’ve received two books from Pansing which are THE PERFECT WORLD OF MIWAKO SUMIDA and THE YELLOW BIRD SINGS. Both of these books receive good reviews, so I am excited to read them. / Thank you @definitelybooks for sending me these books to enjoy ✌🏽
This is my March TBR 🍃 I have already read three books from the pile and my favourite is THE TWO LIVES OF LYDIA BIRD. I have already reviewed it so don’t forget to check it out. Link in bio. / Many thanks to @definitelybooks and @times.reads for sending me these awesome ARCS in exchange of an honest review 🤓
[REVIEW LINK IN BIO] Happy Book Birthday to this amazing book, BREAK THE FALL by @jennifercarolyn 💚 . / One of the things that made me intrigued in reading this book was the subject discussed, which was about sexual assault that happened in the sports scene. This fictional story of BREAK THE FALL was inspired by the news of sex abuse scandal surrounding the USA gymnastics team doctor, Dr. Larry Nassar. Yesterday, I have also just watched a documentary called Breaking Their Silence: Inside Their Gymnastic Scandal, based on the same topic as well. There were interviews with the parents and also the victims of the sexual assault. What I can say is that they are all so brave and courageous in fighting back to make sure the perpetrator is caught. The importance of BREAK THE FALL is to encourage more discussion about mature issues so that the public could understand how serious and detrimental it is to the victims and their families. Behind all of the popularity and fame, there’s also dark side to it. / I truly hope that this book can change on what we perceive on sexual assault. BREAK THE FALL is definitely one of the greatest YA books of 2020.
Are you frustrated by politics? Tired of your Twitter feed? Looking to make a difference in the world? Then this book is for you! / YES NO MAYBE SO by @beckyalbertalli and @aishacs is a YA story that will capture your heart and make you want to fight for change. I’m just one chapter in and I can tell that this book will blow my mind. / QOTD: What book are you currently reading? 🤓
This is my February TBR 🌿 I have received so many books this month and I am really hoping to catch up with my reading and reviewing progress. I’m currently reading BREAK THE FALL by Jennifer Iacopelli. Special thanks to @definitelybooks #pansing for always sending me wonderful books in exchange of an honest review ❤️
Currently reading A HEART SO FIERCE AND BROKEN by @brigidkemmerer and I am so happy to dive into Emberfall again 🌲 The second book has a twistier and better story compared to the first one, and that makes me hooked. / Special thanks to @definitelybooks #Pansing for sending me this gorgeous book 💚 This book is already available in all bookstores near you.
Back to top
%d bloggers like this: